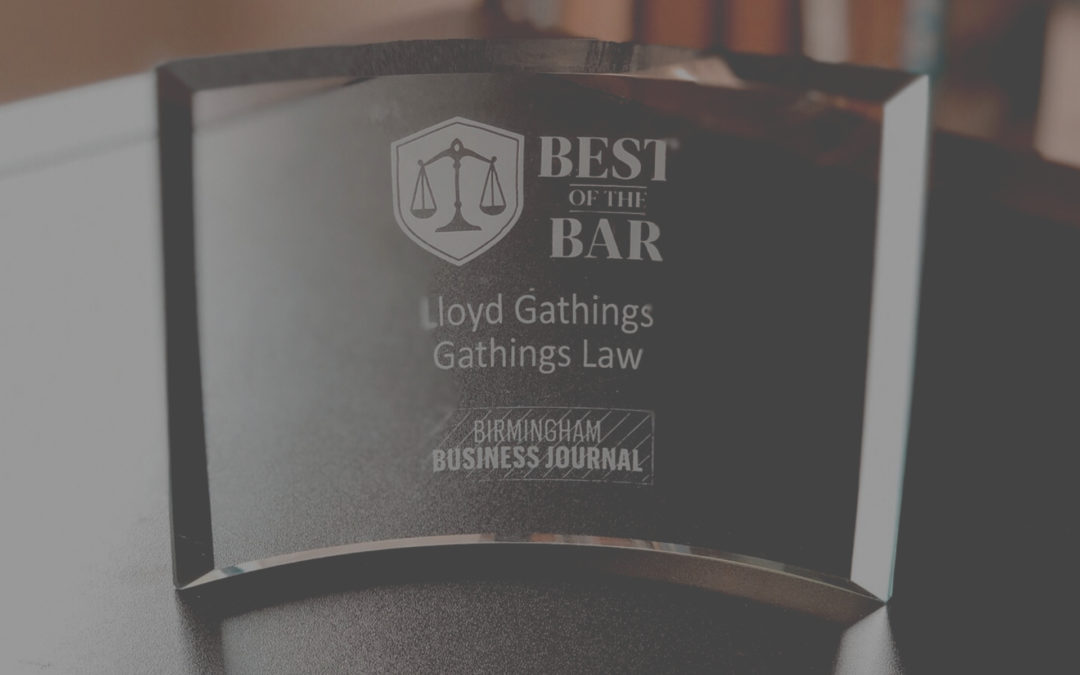 Gathings Law congratulates Lloyd Gathings, Gathings Law Co-founder and Senior Partner, for being honored this year at the Birmingham Business Journal’s Best of Bar Awards. The Best of Bar Awards highlight lawyers in multiple legal areas in the Birmingham community. The winners were chosen based on their accomplishments, their contributions to law, and their status in their practice area.

Over the course of his 40 year career,

Lloyd Gathings has been very active on the Birmingham Bar Association’s Executive Committee, the Birmingham Bar Bulletin Editorial Board, and served as Vice-President and President of the Board of Directors of the Birmingham Bar Foundation. He is a current member, and past President, of the Alabama Trial Lawyers Association. During his term as President, Mr. Gathings was the lead negotiator in the Alabama Workers’ Compensation Reform as well as other consumer legislation. He helped form Alabama Lawyers for Children, an organization dedicated to the prevention of child abuse in Alabama, and served as one of the original directors and Chairman of the Board of Directors. He was also instrumental in forming the Alabama Civil Justice Foundation, a charitable organization for the purpose of raising funds for various charitable organizations in Alabama, including legal service organizations. He is a member and participant of the Sedona Conference; a nonprofit research and educational organization committed to advancing the law in a fair and logical manner through the publication and creation of unbiased consensus commentaries and continued legal education for both the Bench and the Bar.

In addition to his extensive volunteer work, Mr. Gathings has distinguished himself in the field of personal injury law by being an innovator in the field of products liability. He is believed to be the first plaintiff’s counsel in Alabama to perform actual crash tests in automobile products liability cases or to use video simulations of vehicle crashes for reconstruction purposes. Having successfully handled noteworthy products liability cases in the Supreme Court of Alabama, he has also been lead counsel or co-counsel in many plaintiffs’ cases resulting in verdicts or settlements in excess of $1 million.

Being a trial attorney, Mr. Gathings has utilized these skills in the area of business litigation and has recovered millions for his business clients. He has also been selected as one of America’s Premier Lawyers, America’s Top 100 High Stakes Litigators and awarded Alabama Super Lawyer status in class action and mass tort litigation. He is also a frequent continued legal education speaker and author of numerous articles in various legal publications.